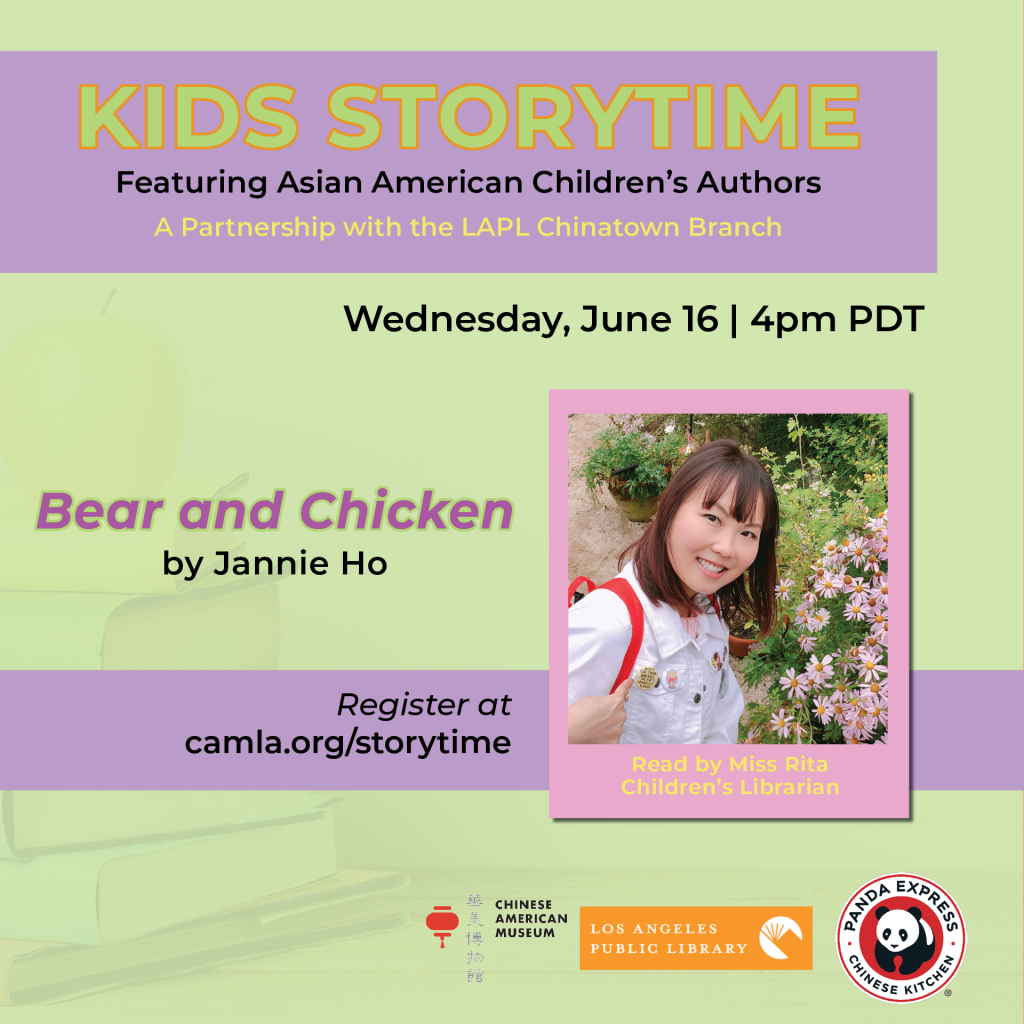 Join our next Kid’s Story Time Featuring Asian American Children’s Authors on Wednesday, June 16 @ 4 pm PDT. Miss Rita will be reading Bear and Chicken, a funny and clever friendship tale that teaches kids that things are not always as they seem, while learning a thing or two about making soup with a friend.

This book is suited for children 3-5 years old, though we welcome children of all ages with parental supervision.

Kid’s Story Time is hosted in partnership with the Chinatown Branch Library with stories read by Children’s Librarian, Rita Law.

About the author Jannie Ho:
Jannie Ho has a BFA in illustration from Parsons The New School of Design and has been an in-house graphic designer at Nickelodeon and Scholastic, as well as art director for TIME Magazine for Kids. Since 2006, she has been doing illustration work full-time. Jannie lives in Boston, MA.

Commemorating the Legacy of Vincent Chin 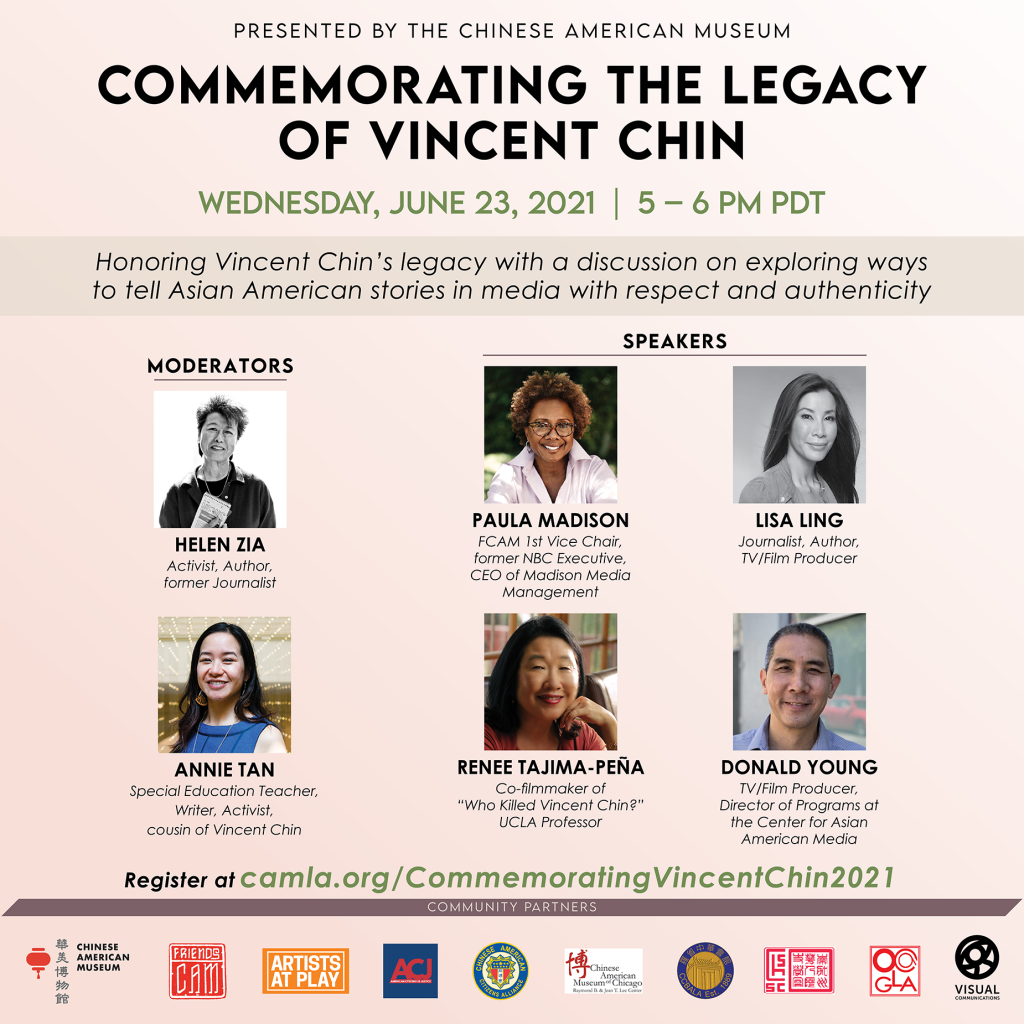 Join CAM on June 23, 2021, @ 5 pm PDT for our annual commemoration of Vincent Chin, a Chinese American draftsman from Detroit brutally murdered in 1982 in an act of racism. His death sparked an outpouring of unity across the Asian American community and a call for justice nationwide as his murderers never received any jail time. During the COVID-19 pandemic and rise in anti-Asian hate, Chin’s story has resurged to the forefront.

This year’s panel discussion will pay tribute to Chin’s legacy in the Asian American Movement by igniting an important conversation about telling our stories with authenticity and reverence. In a year and a half filled with increased anti-Asian hate, the need to tell these stories has become direr. The panelists will discuss more suitable ways to respectfully honor historic Asian American stories.

The Chinese American Museum is honored to host Commemorating the Legacy of Vincent Chin by welcoming the following speakers:

Renee Tajima-Peña, co-filmmaker of the film, Who Killed Vincent Chin? and UCLA professor

Donald Young, TV/film producer and Director of Programs for the Center for Asian American Media

Preceding the live panel discussion will be an opportunity for registrants to screen the documentary film Who Killed Vincent Chin? by Renee Tajima-Peña and Christine Choy. The film will be available to view on June 22 from 5 pm – 8 pm PDT only. The film length is approximately 1.5 hours. Registration is required to access the film.

Helen Zia is a writer, activist, and Fulbright Scholar. The daughter of immigrants from China, Zia’s groundbreaking journalism and community organizing was crucial in bringing federal civil rights charges against the murderers of Vincent Chin. The landmark civil rights case is featured in the documentary film Who Killed Vincent Chin? In 2002 Zia was appointed to serve as executor to the Chin estate. In 2010, she was a witness in the case for marriage equality that went to the Supreme Court. A graduate of Princeton University’s first coeducational class, Zia has received two honorary doctorates. After attending medical school, she became a community organizer, construction laborer, autoworker, and after which she discovered her life’s work as a writer. Her first book, Asian American Dreams chronicled the emergence of AAPIs in contemporary America; her second book, My Country Vs. Me, about physicist Wen Ho Lee who was falsely accused of being a spy. Her latest book is Last Boat out of Shanghai.

Annie Tan is a special education teacher, storyteller, writer, speaker, and activist based in Chinatown, New York. Her work focuses on growing up Asian American and as a kid of immigrants, teaching, teachers unions, and public education, and organizing for a better world. Tan’s work has been featured in The New York Times, Huffington Post, The New Republic, PBS’ Asian Americans, and twice on The Moth Radio Hour. She is currently working on her first book, a memoir, and hopes one day to write an epic book about her family and Asian American history. Tan keynoted the Museum of the City of New York’s “Teaching Social Activism” Conference in May 2019, and has performed as a storyteller and speaker with the Moth Mainstage and other shows, including hosting shows and fundraisers. Tan is also a cousin of Vincent Chin and great-grand-niece of Lily Chin.

Paula Williams Madison is Chairman and CEO of Madison Media Management LLC, a Los Angeles-based media consultancy company with a global reach. In 2011, Madison retired from NBCUniversal, where she had been Executive Vice President of Diversity as well as a Vice President of the General Electric Company (GE), then the parent company of NBCU. Honored for corporate leadership and community outreach, Madison was named one of the “75 Most Powerful African Americans in Corporate America” by Black Enterprise Magazine in 2005 and included in the Hollywood Reporter’s “Power 100.” In 2014 she was recognized as one of the Outstanding 50 Asian Americans in Business and honored by the East West Players and AARP with their Visionary Award. Madison is currently the First Vice-Chair of the Friends of the Chinese American Museum.

Renee Tajima-Peña is an Academy Award-nominated documentary filmmaker whose previous films include Who Killed Vincent Chin?, My America…or Honk if You Love Buddha, No Más Bebés. Tajima-Peña is the series producer of Asian Americans, the ground-breaking 5-part docuseries on the Asian American experience that aired on PBS in May 2020. The first-ever television history of its kind. Her company, Tajima-Peña Productions produced the series in association with the Center for Asian American Media, WETA, the Independent Television Service, and Flash Cuts. She is co-founder/executive producer of the May 19 Project a social media campaign that centers the legacy of AAPI solidarity with other communities at www.seeusunite.org/unite.

Lisa Ling is an award-winning journalist, host, and executive producer of the CNN Original Series, This is Life with Lisa Ling. Previously, she was a reporter on Channel One News, a co-host on the ABC daytime talk show The View (1999–2002), the host of National Geographic Explorer (2003–2010), and a special correspondent for The Oprah Winfrey Show. She is the co-author of Mother, Daughter, Sister, Bride: Rituals of Womanhood and Somewhere Inside: One Sister’s Captivity in North Korea and the Other’s Fight to Bring Her Home, which she penned with her sister, Laura. In 2014, President Obama named Ling to the Commission on White House Fellows.

Donald Young is the Center for Asian American Media’s Director of Programs. He oversees CAAM’s program areas and specifically develops and implements CAAM’s national productions and national PBS strategies. In public television, Young has supervised the national broadcasts of over 150 award-winning projects. As a producer, he has worked both in documentaries and independent feature films. Key projects include the epic five-hour PBS history series Asian Americans, a co-production with WETA and produced by Renee Tajima-Peña; Family Pictures, USAby Thomas Allen Harris; and a feature film adaptation of Chang-rae Lee’sComing Home Againdirected by Wayne Wang