The Commemoration of the 1871 Los Angeles Chinese Massacre

A livestreamed performance that chronicles the history of the Chinese Massacre of 1871 through music, movement, and spoken narrative. In partnership with UCLA Asian American Center, UCLA Asia Pacific Center, and Scripps College. Narrated by Hao Huang.

From Past to Present: Remembering 1871

This virtual panel discussion introduces the history of the Chinese Massacre of 1871 and how it resonates today. Moderated by Dr. Gay Yuen.

How to Teach the History of the Chinese Massacre of 1871

A specially curated workshop for educators to introduce new curriculum created to teach the themes and impact of the Chinese Massacre of 1871 to students in grades 3-12. Facilitated by Stewart Kwoh and Prabhneek Heer of the Asian American Education Project.

Collective Memory: An Unpacking of Racially Motivated Tragedies Throughout US History

A virtual panel discussion addressing the shared histories of racially motivated acts of violence in the United States such as the 1921 Tulsa Race Massacre, the burning of Chinatown in Antioch, CA, and the genocide of Native Americans. Moderated by Jason Chu.

This pre-recorded tour will take you through history by retracing forgotten sites of the Chinese Massacre of 1871.  Hosted by Mike Woo.

Shaping a Memorial: Civic Memory and the Effort to Honor the Victims of the Chinese Massacre of 1871

Hear the latest details about the City of Los Angeles’ plans to develop a memorial for the victims of the Chinese Massacre of 1871 and the links between that effort and the Mayor’s Office Civic Memory Working Group. Moderated by Christopher Hawthorne.

Post-Production Discussion: A Theatrical Conversation into the Chinese Massacre of 1871

Viewers are invited to first preview excerpts from the play The Chinese Massacre (Annotated) by Tom Jacobson and directed by Jeff Liu will be available to stream online for a limited time from Oct 22nd – 24th.

Join us we host a virtual panel discussion to explore how this history is retold on stage. In partnership with Artists at Play.

This commemoration week will culminate with a virtual ceremony in remembrance of the victims of the 1871 massacre. The program will include the reading of the victims’ names, the laying of the wreaths, and a bowing ceremony to honor their souls.

On October 24th, 2020 @ 5:00 p.m. PDT, the Chinese American Museum will commemorate the historic tragedy known as the Los Angeles Chinese Massacre of 1871, the result of growing anti-Chinese sentiment in the region. One of the most heinous acts of racially motivated violence Los Angeles has ever experienced took place in the streets near our present-day museum.

We invite you to stand with us virtually in commemorating the lives lost 149 years ago.

The commemoration marks this somber moment in American history with a memorial for all the lives lost in this historical tragedy and creates a space for reflection on contemporary issues of race and violence.

In addition to the performance of an excerpt from Lloyd Suh’s play “The Chinese Lady,” by Artists at Play, the following individuals will be participating in the solemn observance:

We would like to thank El Pueblo de Los Angeles Historical Monument and Artists at Play for supporting this event. 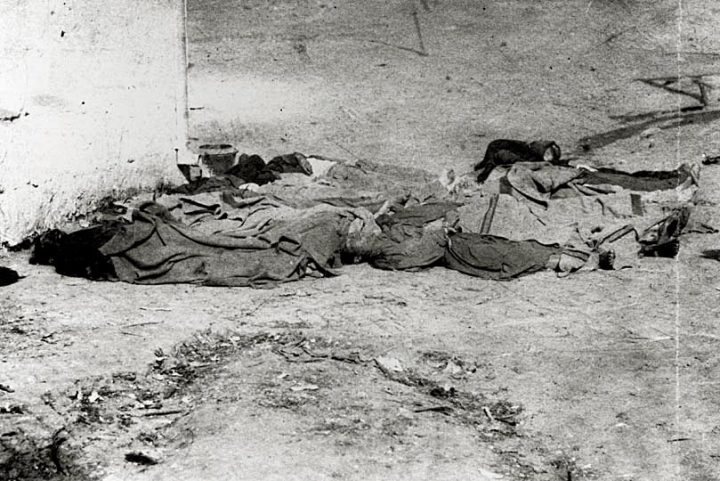 The Chinese Massacre of 1871

On October 24, 1871, seventeen Chinese men including a 15-year-old were killed by a mob in Los Angeles’ historic Chinatown. Known as the Chinese Massacre of 1871, it was the culmination of growing anti-Chinese sentiment leading to racially motivated violence. The incident is said to have begun when Officer Jesus Bilderrain and rancher Robert Thompson responded to a gunfight between members of rival Chinese tongs that broke out resulting in the death of tong fighter Ah Choy. Officer Bilderrain was wounded and Robert Thompson was mortally wounded while responding to the altercation.

Word spread about the shooting of Officer Bilderrain and the death of Thompson, which sparked a riot that lasted for three hours and involved a mob of 500 Angelenos entering Chinatown to loot Chinese homes and businesses and to assault every Chinese person they could find. Join us in commemorating all the lives lost on this fateful day 148 years ago. 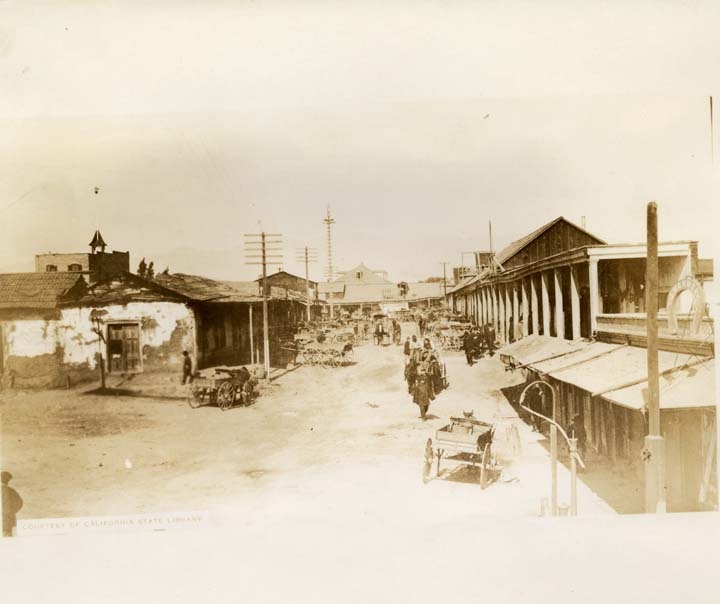 The two paired performances are presented by the Chinese American Museum and El Pueblo de Los Angeles Historical Monument in collaboration with Scripps College. Major support provided by the Kellogg Foundation’s Truth, Racial Healing, & Transformation – Los Angeles. The programs are free and open to the public; however, RSVPs are kindly requested. To RSVP, visit chineseamericanmuseum.eventbrite.com or email rsvp@camla.org. Check our website for other public programs and events.

Currently the endowed Bessie and Cecil Frankel Chair in Music at Scripps College, Dr. Hao Huang has served as a four-time United States Information Agency Artistic Ambassador to Europe, Africa and the Middle East.   Dr. Huang was selected as the China Institute in America’s New York Solo Debut Artist at Weill Recital Hall in Carnegie Hall, and appeared as soloist for the Barcelona Cultural Olympiad and the Georg Enescu Festival in Bucharest, Dr. Huang has been honored as a Fulbright Scholar in American Studies and Music at Eötvös Loránd University, Budapest, and  was appointed to the Fulbright Specialist Program roster from 2012-2017. For eight summers, he was the leader of Scripps College music faculty delegation visits to the College of Arts of Xiamen University, PRC. Additionally, he is very active in Race and Ethnic Studies, for which he was awarded an NEH Teaching Development Fellowship, “Bridging Cultures.”

Micah Huang is a musician, composer and sound artist whose work is dedicated to addressing conflict and injustice without recourse to authority or violence. Despite his Inland Empire Punk roots, he recently received his MA in music composition from Tufts University, where he started an interactive concert series called Under Our Skins: Deprogramming prejudice through music and oral history. After graduating with a BA from Pitzer College, he was a Fulbright fellow to Hungary, where he worked with marginalized Roma/Gypsy musicians as part of their effort to preserve their musical traditions in the face of rampant discrimination and persecution. Micah plays guitar, percussion and electronics in The Flower Pistils.

Emma Gies is a creative musician with special love for singing and playing the violin. She is one half of The Flower Pistils, a dream folk duo based in Boston, MA. (They are about to release two debut singles- give them a listen on Spotify!) She has done much cross-genre exploration on the violin; styles include Western Classical, Hindustani Gayaki-Ang, Scottish and Old-Timey fiddling, and Gypsy Roma music. She released a solo album for violin and voice in 2018 called “What Is Done In Love”. Emma has a MM degree from The New England Conservatory in Contemporary Improvisation and a BA from Pitzer College in Interdisciplinary Musical Performance and Understanding.

Muqi Li is a guzheng (21-string zither) player, vocalist, and improviser from Beijing, China. Currently based in Boston, Ms. Li  has also lived and actively performed throughout China, England, and Australia, developing a unique style informed by free improvisational models and European, African, and Asian folk styles as much as her traditional Chinese musical background. She has received a master’s degree in Music Performance from the SOAS University of London, and a Graduate Diploma in contemporary improvisation at the New England Conservatory.

Dr. Charlotte D’Evelyn is an ethnomusicologist and Assistant Professor of Music at Skidmore College. Last year, she taught for a year as a visiting professor of music at Pomona College (2018-19). A specialist in heritage politics, ethnic identity, and regional music cultures of Inner Mongolia, began her career as an ethnomusicologistin 2002 when she first visited China for language study and began studies of the Chinese erhu (two-string fiddle). Her curiosity for this music launched her into a life-long interest in spike fiddles of the silk road and music cultures of East Asia. Dr. D’Evelyn is active as a performer and student of the Chinese erhu, viola (four-string European fiddle), morin khuur (two-string Mongolian horse-head fiddle), and khöömii (Mongolian throat singing).

Daniel McCarty is a multimedia artist working out of Los Angeles, CA and Vienna, Austria.  He recently completed a film series for the European Music Institute in Vienna for the production of EMIV’s 2019 Image Film with artists Martin Hughes and Maximilian Kromer. Another recent project was a commission from AVRP Studios, Dodd Engineering and Davis Reed Construction, documenting the completion of The Urban Academy that was recognized by the American Institute of Architects San Diego’s Urban Design Honor Award.  He has collaborated with Dr. Rudolph Krachler, ao., Prof. Dr. Regina Krachler and ao. Prof. Dr. Bernhard Keppler, Faculty of Chemistry at the Institute of Inorganic Chemistry of the University of Vienna, producing a film series titled “The Magic of Peatlands” on location in Northern Scotland, Vienna Austria and Seewinkel National Park.

Discover materials on Calisphere, Online Archive of California, and ArchiveGrid

The bodies of 17 dead Chinese men and boys lie in the Los Angeles jail yard on October 24, 1871, the results of the Chinese Massacre. LAPL. Security Pacific National Bank Collection.