Commemoration of the Chinese Massacre of 1871 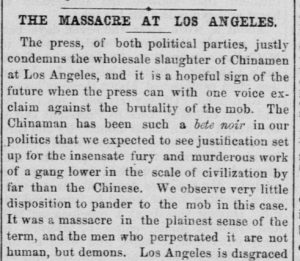 On October 24, 1871, seventeen Chinese men including a 15-year-old were killed by a mob in Los Angeles’ historic Chinatown. Known as the Chinese Massacre of 1871, it was the culmination of growing anti-Chinese sentiment leading to racially motivated violence. The incident is said to have begun when Officer Jesus Bilderrain and rancher Robert Thompson responded to a gunfight between members of rival Chinese tongs that broke out resulting in the death of tong fighter Ah Choy. Officer Bilderrain was wounded and Robert Thompson was mortally wounded while responding to the altercation.
Word spread about the shooting of Officer Bilderrain and the death of Thompson, which sparked a riot that lasted for three hours and involved a mob of 500 Angelenos entering Chinatown to loot Chinese homes and businesses and to assault every Chinese person they could find. Join the Chinese American Museum and community leaders to commemorate all the lives lost on this fateful day 147 years ago.

Following the program, the museum will be open to view the exhibitions from 8-9 pm. 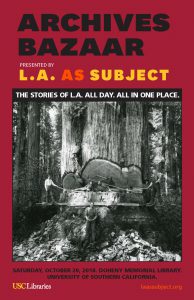 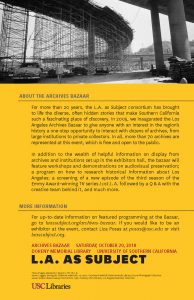 The Chinese American Museum will be participating in the 13th Annual Los Angeles Archives Bazaar on Saturday, October 20th at USC Doheny Library. Stop by our table!

For more than 20 years, the L.A. as Subject consortium has brought to life the diverse, often hidden stories that make Southern California such a fascinating place of discovery. In 2005, we inaugurated the Los Angeles Archives Bazaar to give anyone with an interest in the region’s history a one-stop opportunity to interact with dozens of archives, from large institutions to private collectors. In all, more than 70 archives are represented at this event, which is free and open to the public. For up-to-date information on featured programming at the Bazaar, go to laassubject.org/archives-bazaar. Facebook event page here. 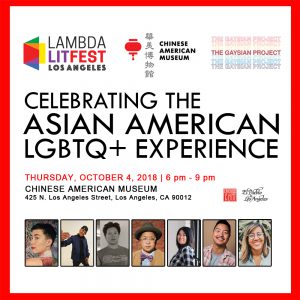 CELEBRATING THE ASIAN AMERICAN LGBTQ+ EXPERIENCE brings together queer identified artists, musicians, and writers in historic downtown Los Angeles at the Chinese American Museum for Lambda Literary’s LitFest 2018. CAM’s current exhibit “Don’t Believe The Hype: LA Asian Americans in Hip Hop” challenges and redefines what hip hop represents, specifically within the Asian American community and how hip hop itself allows for more exploration for gender and sexual identity, defying expectations of “traditional” expectations. But whose expectations shape our experiences? Our community, our parents, ourselves? What does it mean to be queer and Asian American and how does one experience inform the other? Lambda Literary and CAM invite you to explore the exhibit and join us for a panel discussion with D’LO, NATHAN RAMOS, KAY ULUNDAY BARRETT, KITTY TSUI, ADDIE TSAI, MAYA REDDY, and moderated by CB LEE, presented with support from The Gaysian Project. Facebook event page here. 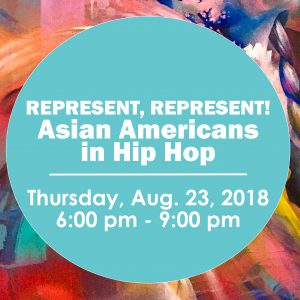 CAM presents a summer evening of music by DJ Phatrick and speakers discussing representation of Asian Americans in the hip hop music industry. Don’t Believe the Hype: LA Asian Americans in Hip Hop, CAM’s current exhibition, explores the genre as an outlet of expression and as a site of resistance for the Asian American community. Speakers including Arnel Calvario, Jason Chu, DJ Kuttin Kandi, DJ Phatrick, and Richie Traktivist will explore how the community disrupts the passive “model minority” stereotype by pursuing artistic careers in hip hop as dancers, rappers, DJs, and producers and their challenges of navigating the music industry.

A Q&A discussion moderated by the co-curators Justin Hoover and Ninochka McTaggart, PhD will follow the presentations. This event also celebrates the launch of the zine published in conjunction with the exhibition. Extended hours Aug. 23: museum will be open from 5:00 to 6:30 pm before the program.

Major support for this program is provided by the Friends of the Chinese American Museum with additional support provided by the Department of Cultural Affairs, City of Los Angeles. 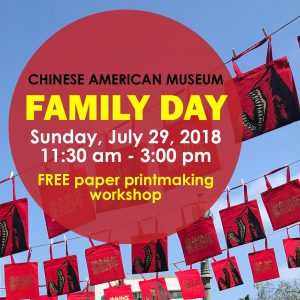 Join us for a day of printmaking to celebrate the museum’s latest exhibition Don’t Believe the Hype: LA Asian Americans in Hip Hop. Inspired by the silk-screened tote bags created by LA-based artist Shark Toof, you’ll be able to create your own prints using paint on paper. Add your own artistic flair by etching your custom designs on foam printing plates. After completing your masterpiece, visit the museum and explore the exhibition. Admission to the museum and workshop are free. Materials will be provided.

Join us in celebrating the release of Circles and Circuits: Chinese Caribbean Art exhibition catalog with a reception and panel discussion featuring co-curator Alex Chang, catalog contributors: Lok Siu and Sean Metzger, and artists featured in the exhibition including Maria Magdalena Campos-Pons, Richard Fung, and Yoland Skeete. The evening will include a screening of short films by Richard Fung, Peter Chin, and Maria Magdalena Campos-Pons during the reception. Visit Circles and Circuits II: Contemporary Chinese Caribbean Art at the Chinese American Museum before the reception and panel.  Extended hours — the museum will be open until 7pm on February 23, 2018. More details to come!