From 1850 to 1900, more than 100,000 Chinese, mostly men, came to the United States. Nearly all of them came from the southern province of Guangzhou in China to seek wealth to support their families. They initially came to the United States in search of “guam suan” (gold mountain), but later found occupations in other fields such as laundries, restaurants, and railroad construction.

Not wanting to make the United States their permanent residence, these men traveled without their wives and children. However as they settled in and wanting to start families, or bring their existing family over, a barrier came in by way of the Page Law in 1875. This law prohibited forced laborers and prostitutes from entering the United States. Being as it was extremely difficult for Chinese women to prove that they were not prostitutes, there weren’t many Chinese women able to immigrate to the U.S. Bachelor societies, communities made up of predominantly male populations, formed and soon became some of the first Chinatowns in the United States. Shops, restaurants, and community spaces developed to provide resources to local Chinese residents living without their families.  In Los Angeles, the population of Chinese living in the region grew from 172 in 1870 to approximately 3,000 by the late 19th century. 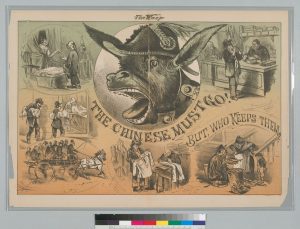 “The Chinese Must Go, But Who Keeps Them?” – 11 May 1878 by George Frederick Keller for The San Francisco Illustrated Wasp. UC Berkeley – The Bancroft Library

Outside of the Chinese community, anti-Chinese sentiment was rampant. Chinese were blamed for the moral decay of society; racist propaganda in popular magazines, newspapers, and advertisements depicted the Chinese as pests polluting the nation. A wave of violence against Chinese throughout the United States led to massacres and the forced removal of Chinese residents in their homes. Racist organizations, including the Workingman’s Party of California, formed to sanction these efforts.

The Chinese Exclusion Act of 1882 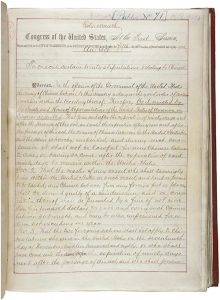 An act to execute certain treaty stipulations relating to the Chinese, May 6, 1882; Enrolled Acts and Resolutions of Congress, 1789-1996; General Records of the United States Government; Record Group 11; National Archives.

With the increased anti-Chinese sentiment, economic depression and growing unemployment rates in the 1870s, Congress passed the Chinese Exclusion Act in 1882 to ban nearly all Chinese immigration to the United States for ten years.  Exceptions were made for  merchants, students, teachers, diplomats, and travelers.

In 1892, the Exclusion Act expired, but in its place came the Geary Act that extended the ban on Chinese immigration for another ten years. This act continued to prohibit Chinese laborers from migrating into the United States and also forced those already living in the country to register for a certificate with the government within one year to prove their lawful residency. If caught without this certificate, they would immediately be deported. Furthermore, the act denied Chinese immigrants bail in habeas corpus cases.

The Chinese Exclusion Act and the subsequent legislation were the first and only of its kind to discriminate based on ethnic background.

In 2012, a bipartisan resolution formally expressed regret from the House of Representatives for the Chinese Exclusion Act of 1882 and the following legislation that continued to discriminate against people of Chinese origin in the United States.

Book a guided tour of the Chinese American Museum and see the permanent exhibition Journeys. The exhibition narrates Chinese immigration to the United States with an emphasis on community settlement in Los Angeles. The display is outlined into four distinct time periods. Each period is defined by an important immigration law and event, accompanied by a brief description and a short personal story about a local Chinese American and their experiences in that particular historical period.