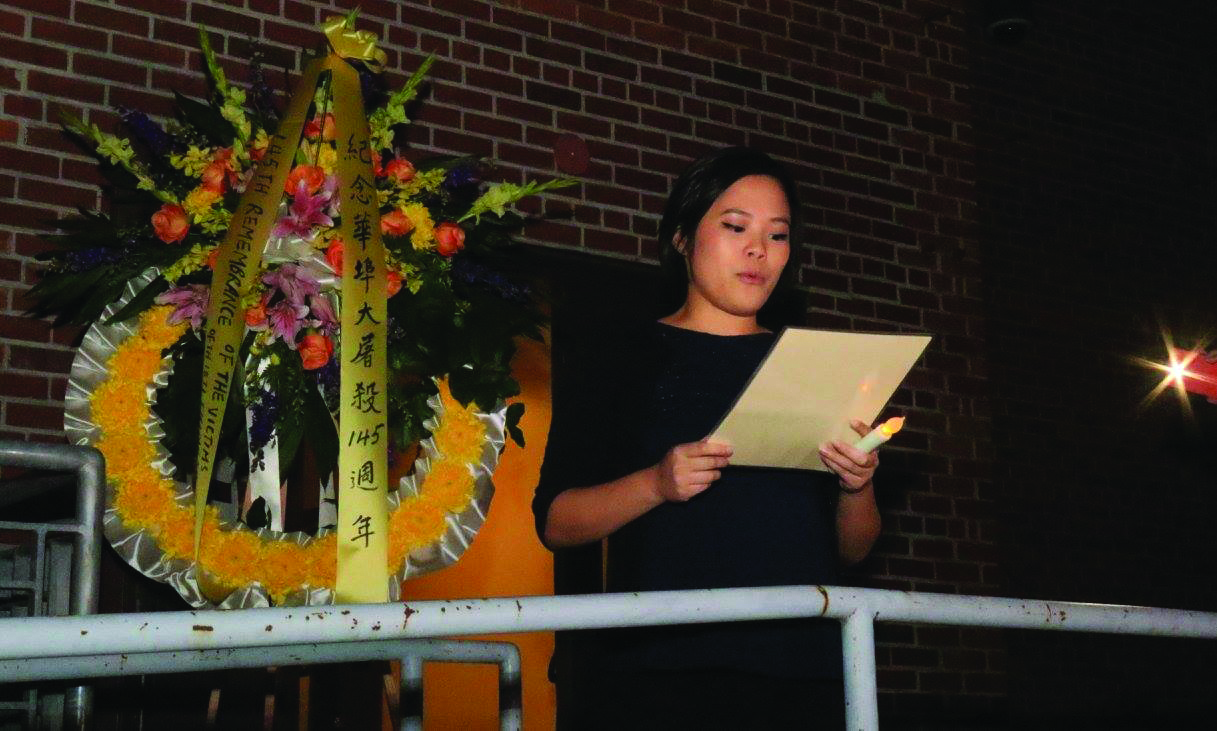 My name is Pam and I’m honored to be here with you all to commemorate such an important event in American history. I had the privilege of being an intern at CAM last Summer, and I have so much appreciation for this space, the staff, and what this museum ultimately stands for. So, thank you all so much for thinking of me.

As I look across this courtyard, I’m thinking a lot about the idea of lineage — about how stories and spaces, get passed down, strengthened, or fought for, over time. Today we are are here honoring those who lost their lives for no reason except for being Chinese, and for being at the wrong place at the wrong time.

It means a lot to me to be speaking about why remembering this incident of racist violence is important; because I see myself, and my peers of this generation, as the newest members of this lineage of community members who’ve fought, and are fighting, for our stories to be recognized, respected, and remembered. And not just in a passive, anecdotal way, but in which the essence of this terrible instance is really broken down, analyzed, and applied to the society we currently live in — so that no acts of violence based upon ignorance will happen again.

I see the 1871 Chinese Massacre as a reminder of how much progress we’ve made, but also how much further our community still needs to go. These people died at the hands of racism. The vigilantes who killed them, only saw these men and boys as economic threats from far away, and they are not that different from the many today who still believe in telling people to “go back to their country” regardless of how many generations they have lived here.

Just a few weeks ago, a New York times reporter and his family were told to go back to China; last week, an LA times article ran a story that painted “Asians” in Monterey Park and Alhambra as tsunami waves in dichotomy to a white man they described as just “American” — the rhetoric, sometimes coded and sometimes not, is still there.

I first learned about the Chinese Massacre right after my first year in college on a tour here at CAM for an Asian American sponsor group I was in. At this point in my life, I was beginning to claim and understand Asian American identity, and to pursue a degree in Asian American studies. I grew up in Alhambra, coming to Chinatown once a week when I was younger — this is my community — so when I learned about this piece of history I was completely floored. How is it that I didn’t know this before? One of the things that my friends and I often talk about is the idea of knowing history in order to know the self. You can imagine how indignant I was at the fact that I didn’t know about the Chinese Massacre that happened practically in my backyard.

I began to pursue what else I didn’t know about my community here in LA by volunteering and chatting with a multitude of people. I learned about how Chinatown, as it exists today, is far from being dead as I, and many others, had believed — there are still so many families, both old and new, with so many stories to tell, fighting to exist here despite all of the changes. I learned that my hometown of Alhambra, which has many books written about it, wasn’t always predominantly Latinx and Asian American and is actually considered an ethnoburb.

I am here amongst a lineage of storytellers, who have taught me not only to develop and exert myself and my stories, but also of all those who have come before me, who have made it possible for me to be here today. We have so much to share, and we must keep doing so.

Just yesterday, I talked to a coworker of mine about this event. Before I could delve into my personal public speaking nerves, she stopped me and said that she had never heard about it. After I explained it to her she went into a thoughtful silence and said, “wow, I never knew”. To which I responded, “it’s okay, now you do!” For everyone who is learning about this for the first time, whether my age, or older, and regardless of whether you’re Chinese American or not — I extend this same sentiment to you. “It’s okay, now you know.” But now that you know, what’s next? How will we ensure that the men and boys who died on this day more than a century ago, and the many people who have died since then because of bigotry, do not die in vain? How will we leave our mark for the next people in this lineage of truth seekers and tellers? Let’s figure it out together. Thank you!