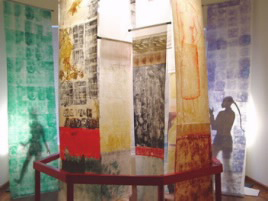 Created by Los Angeles-based artist Cindy Suryiani, this mixed media art installation consists of light, hanging Chinese rice paper scrolls and life size puppets explored themes of identity, displacement, inclusion, and ultimately of Americanism. Named after the grueling immigrant processing center off the coast of San Francisco, the body of work reinterprets the Island (as it was called by its inmates), from a political, historical perspective, and explores the experiences of the Island’s many Chinese detainees.

Suriyani’s work illustrates the poems of hope, frustration, and longing etched into the barracks’ walls, bedposts, and open surfaces by immigrants from China’s Pearl River Delta. The Island symbolizes more than a rite of passage into the multitude of uncertainties that defined Chinese American experience in the early Twentieth Century. As a nation of immigrants and their descendants, this exhibition underscored the issue of transculturalism, our struggle for human dignity, and our need to make where we are a place we can call home.