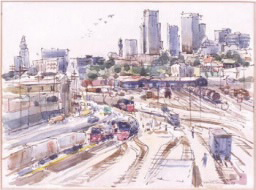 This retrospective exhibition on Milton Quan showcased the broad range of the artist’s practice from fine art to commercial work, much of which is on public display for the first time.

Milton Quon is a native of Los Angeles, born in 1913. He is the eldest of eight children and the only son of the Ng Quan Ying family. After graduating from the Chouinard Art Institute (now the California Institute of the Arts), Quon began his professional career with Walt Disney Studios in 1939, helping animate the films Fantasia and Dumbo. He returned to Disney after the war, joining the Publicity/Promotions Department, doing promotional art on projects and films, including Make Mine Music and Song of the South. Following his tenure at Disney, Quon built a long and successful career as a commercial artist, first as an art director for the ad agency BBD&O, and later at the packaging firm Sealright Co., Inc. Quon also shared his creative talent as an instructor at Los Angeles Trade Tech College.

From whimsical cherubs in Disney’s Fantasia to bold advertising posters, Quon’s commercial work will be presented alongside the artist’s rich collection of fine art works. Quon’s plein-air watercolors chronicle everyday life against the backdrop of Los Angeles’s diverse scenery in a changing natural and urban landscape, from a pre-Dodger’s Stadium Chavez Ravine Grocery store and New Chinatown Gateway to the Santa Monica Beach Pier. With rich, intuitive colors and expressive lines, Quon captures in watercolor the vibrant energy of our sun-kissed beaches, the dreary structures of industrial refineries and the crowded train yards converging at the heart of Los Angeles.

As a tireless artist, fishing enthusiast and avid traveler, Quon is always armed with a sketchbook, pens and watercolors, recording subjects of local interest as well as his travels across the country and abroad. Finally, the exhibit will also feature Quon’s imaginative personal Christmas cards which blend conventional Christmas imagery with traditional Chinese painting style and elements.