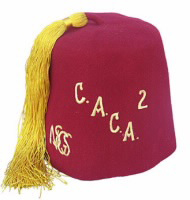 The official Fez of Los Angeles Lodge, the second Lodge to be established in the Alliance in the 1930s.

The Chinese American Citizens Alliance is a national organization whose purpose has been for more than a century to advocate for the rights and promote the well being of the Chinese American community. A group of young men, born in America of Chinese ancestry, formed the Alliance in San Francisco, California in 1895 to fight discriminatory laws fueled by wide spread anti-Chinese sentiment in the late 19th Century.

Since its inception, the Alliance has generated a broad range of political, social and cultural activities based on its abiding commitment to the Chinese American community. Youth programs focusing on civic duty, community awareness, and cultural pride have been a large part of the Alliance’s repertoire of community-wide activities. On display in this exhibition were objects ranging from artifacts to historic collateral materials provided by the various Alliance Lodges located throughout the Unites States.