Sunshine and Shadow: In Search of Jake Lee 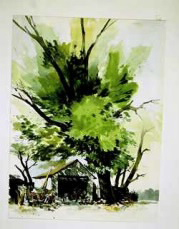 Jake Lee (1915 -1991) was a major figure in 20th-century California art, whose legacy remains a subject of growing interest in the Chinese American community. Lee was a master watercolorist who produced an extensive body of work as both a fine artist and a commercial artist. He was also a beloved teacher whose students continue to be inspired by his instruction and his example.

Lee’s first-ever solo museum exhibition brings together watercolor paintings, sketches, photographs and other personal ephemera representing the artist’s life and work. Sunshine and Shadow features many artworks that have never been seen by the public, as well as stories gathered from art collectors and close friends of the artist himself. This in-depth look at Lee’s oeuvre showcases the artist’s signature use of color, his distinctive play of light against shadow, and his uncanny ability to find beauty in even the most mundane subjects. Among the urban and idyllic landscapes and seascapes comprising the exhibit are the covers Lee painted for the Automobile Club of Southern California’s member magazine, Westways, from the 1950s to 1970s.

Lee’s impressive work places him among the most important Asian American artists of his generation. Late in his career, Lee began to use his art to express some of the tension he felt as a person of two cultures, which is why Lee’s work resonates with Chinese American audiences and continues to find new appreciation among viewers of all ages and backgrounds.

The exhibition Sunshine and Shadow: In Search of Jake Lee will be on display from Friday, November 30, 2007 through Sunday, April 13, 2008. A fully illustrated exhibition catalog is available at the Museum Gift Shop.

This exhibition and catalog were produced by the Chinese American Museum in cooperation with the Automobile Club of Southern California.