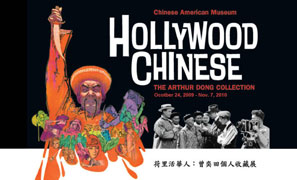 Hollywood Chinese: The Arthur Dong Collection is a groundbreaking exhibition of movie memorabilia collected during the ten-year research for Arthur Dong’s documentary on the Chinese in American feature films, “Hollywood Chinese.” From the filmmaker’s archive of over 1,000 items, a selection of posters, lobby cards, stills, scripts, press material, and other artifacts dating from 1916 to present-day offer vivid graphic examples of how the Chinese have been imagined in the movies during the last century. The show also documents the work of Chinese and Chinese American film artists through the decades who have triumphed as well as struggled with an industry often ignorant of race. Filmmaker Arthur Dong is the Guest Curator for this exhibit.

In addition to iconic depictions evidenced by material from films such as “The Good Earth,” “The Vengeance of Fu Manchu,” “Charlie Chan in Honolulu,” and “Flower Drum Song,” highlights of the exhibition include the surviving archive of pioneer Chinese American filmmaker James B. Leong, who produced the 1921 film, “Lotus Blossom,” in Los Angeles, and rare production photos from the recently discovered 1916 film, “The Curse of Quon Gwon,” the earliest known feature film directed by an Asian American, San Francisco native Marion Wong. Other themes include a look at how cinema exploited the Chinatown mystique, films reflecting anti-Communists attitudes, and a selection of lobby cards from Mexico. On special display will be the first Oscar ® won by a Chinese American, the eminent cinematographer, James Wong Howe, for his work on “The Rose Tattoo (1955)” The statuette is on loan courtesy of the James Wong Howe Estate.

Major funding for “Hollywood Chinese: The Arthur Dong Collection” has been provided by the Academy of Motion Picture Arts and Sciences.