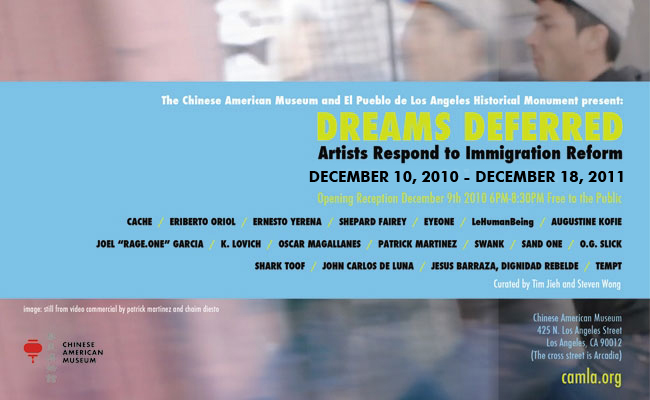 U.S. immigration laws have long reflected a lasting legacy of racial exclusion starting with the 1882 Chinese Exclusion Act, the first legislation to restrict immigration based on race and ethnicity. This legacy of immigration legislation targeting immigrant communities has since reemerged in the recent decades with California’s Proposition 187,and Arizona’s Senate Bill 1070, as attempts at inhibiting the livelihoods of undocumented immigrants.

Dreams Deferred continues the current national dialogue about immigration, kicked-off by the recent opening of CAM’s Remembering Angel Island, an exhibition commemorating the 100th year anniversary of the opening of the West Coast’s first immigration station. Both exhibitions will serve to shed light on the parallels of past and current immigration policies and reform, and how Los Angeles’ diverse immigrant communities collectively share not only their immigrant histories, but also many of the challenges facing new immigrant communities today.